In October, Dave and I raced the Kalahari Augrabies Extreme Marathon. The race is named for where it takes place: in Augrabies Falls National Park, in the Kalahari Desert, eastern South Africa along the border with Namibia. We’ve both raced multi-day staged ultramarathons before, but this would be our first self-supported race.

Self-supported means you must carry your own gear – in other words, carry a fairly heavy pack. In addition to the week’s worth of food, we also had to carry all of our clothing for the week (some racers opted for almost no clothing other than what they raced in – yuck!), sleeping bags and mats, and dishes. Race organizers provided hot water (so freeze-dried instant meals were the go) as well as canvas shelters for us to sleep under. Anything else was up to us. 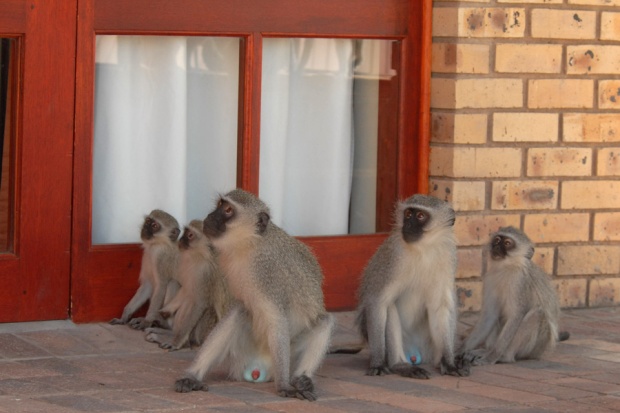 Monkeys showing their stuff. Yup,umm, those are what you think they are…

Cute little monkey family. (I think they are laughing at those boys).

This is the restaurant at Augrabies – frequented by colourful birds and these little dassies.

We were expecting heat – but by the week before the race, the forecast was looking scary! Day-time temperatures for race week forecast to hover around 40°C, or 105°F (and it ended up getting WAY hotter than that). We had been warned about very cold night-time temperatures here, so my husband Dave and I both brought our down jackets. Ha ha,that ended up being a joke.

Compulsory gear check – if we didn’t have all of the required gear, including at least 2000 calories of food per day, we were not allowed to race.

This year’s event had 71 racers entered, 34 of them from South Africa, and the remainder (just over half the field) coming from around the globe: elsewhere in Africa, the Middle East, a great number from Europe, three from Canada (including Dave and me) and one each from Australia and the USA.

Figuring out nutritional needs – packing enough, but not too much, not to mention the right balance of foods – was a challenge. I was carrying enough for close to 3000 calories per day, which ended up being more than I needed. However, I would rather err on that side, than go hungry at the end of a tough week in the Kalahari Desert! 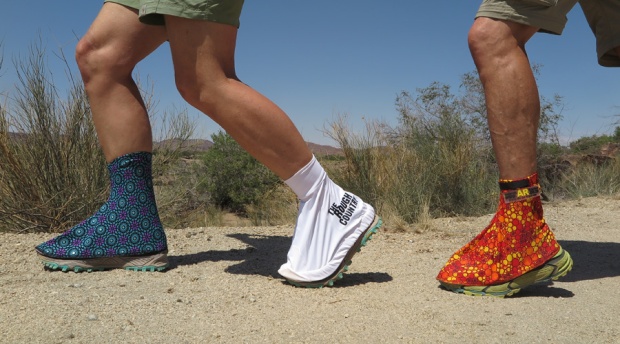 Testing out our sand gaiters – some by ar.co.za and some by Rough Country. They velcro on to the bottoms of the shoes, to keep all sand out (major blister prevention strategy).

Some runners had their packs down to around 7 kg dry weight. Dave’sand mine both came down to 12 kg. We were okay with those weights starting out – not wanting to be missing stuff and suffering out there – but by the end of the race we both had learned so much that we would be able to go way lighter next time. Aid stations were 8-10 km apart, and we were provisioned with 1.5 l of water at each, so we would be carrying up to 1.5 kg of water on top of that dry weight.

Dave and I trained with our weighted packs for only a few weeks before the race. I think I would have been better training with the heavy pack a bit longer than that, as it does put a different type of strain on your joints and your feet – but overall, I was feeling pretty good pre-race.

There were monkeys in our camp/race headquarters at Kalahari Augrabies National Park, and nice short walks to view the waterfalls and gorge. Dave and I went out on a two-hour game drive the afternoon before the race (I feel I should be resting – but I cannot resist seeing more of Africa and its wildlife, not to mention get an idea of the terrain we would be passing through). On the drive, we saw eland, springbok and a giraffe!

Heading out on our pre-race game drive.

A chance to get a look at the country we would be running through. Not a lot of shade. 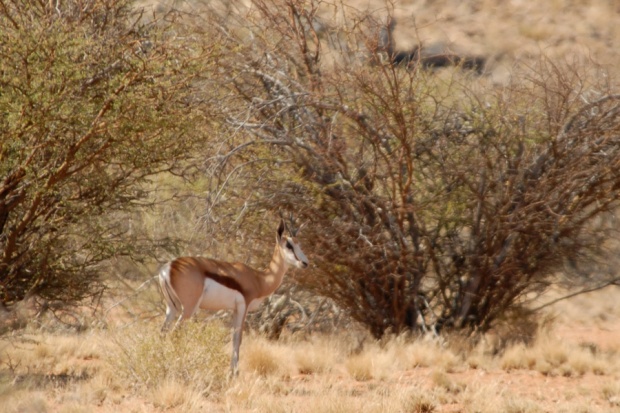 Another lovely view of the gorge.

Long Beach Fun: Running and birding on our (second) honeymoon in California! 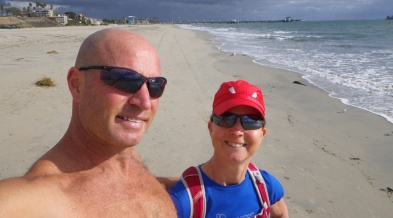 Running on the beach!

Our second Honeymoon was spent on Long Beach (California, not Tofino!) in the fall, one of our favorite places.  Sun, beaches, and birds! 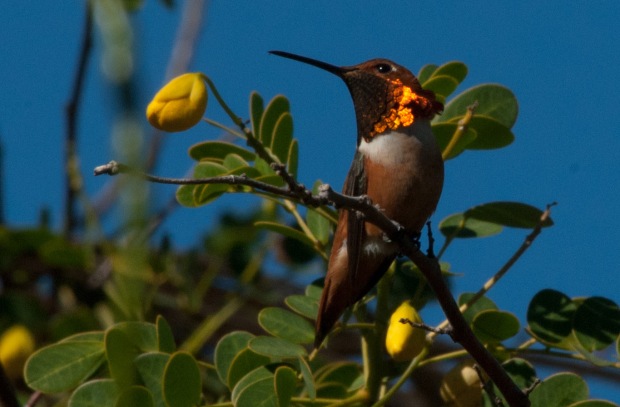 Allen’s hummingbird – a new one for us. They look a lot like the rufous hummingbird, which summers with us on Vancouver Island and then migrates down to Mexico for the winter. But these guys are restricted to just a small part of southern California. A treat to see!

END_OF_DOCUMENT_TOKEN_TO_BE_REPLACED

Hiking the Inlet Trail in the November sun: Port Alberni the best place to live!

Jackie, Xhosa and I took advantage of our warm November sun to hike from China Creek along the Inlet Trail back to Ship Creek road parking lot in Port Alberni.  We packed a lunch, a thermos of hot coffee and set out for a leisurely 5.5 hour stroll along the sunny waterfront; a world-class gem!

Looking south, down the 60 km Alberni Inlet towards the ocean.

END_OF_DOCUMENT_TOKEN_TO_BE_REPLACED

When you are training as a runner, you still have to be conscious about taking rest days, and not injuring yourself or becoming exhausted through overtraining. If you are fairly new to running, then your rest day should probably be fully a rest day. But once you have built up your mileage and endurance, going for a walk or a hike makes a great day of active rest or recovery. Especially if you are training for a marathon or ultramarathon – time on your feet is important, and every extra hour helps! One of Dave’s and my favourite routes for an active recovery rest day is END_OF_DOCUMENT_TOKEN_TO_BE_REPLACED

Vancouver Island has one of the highest density’s of cougars in the world – especially around here, Port Alberni,in the centre of the Island. But that doesn’t mean that we see them much. For all the time I’ve spent in the bush (and I’ve seen LOTS of wild bears and wolves) I’ve never seen a cougar. But the great thing about snow is that you can see animals’tracks. You can tell if they are around, even if you don’t see the creature itself.

On Monday, it was pretty wet and slushy out. I had been END_OF_DOCUMENT_TOKEN_TO_BE_REPLACED

Dave and I couldn’t get a flight from LAX to Peru until five days after his holidays started. It was the first week of January – and we thought it would be much better to wait out our departure in Long Beach, CA, then home in chilly Port Alberni! So we hopped on down there, and had a wonderful low-budget vacation there for four days – not spending much money at all, and doing what we seem to do best: waking and jogging around to see the sights, and eating cheap Mexican food!

We went out every day – some days for long sight-seeing walks and birdwatching, and some days mixing up the END_OF_DOCUMENT_TOKEN_TO_BE_REPLACED

Christmas Birdcount 2013: 45 species of birds around Port Alberni seen in a day! 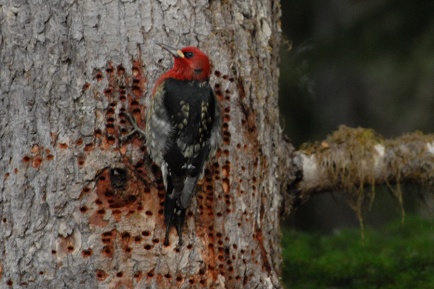 Here’s a fun thing to do outdoors – while doing your bit for your community, the environment, and science: the Audubon Christmas Birdcount! It takes place across North America, and in many other parts of the world too, during December and January. Port Alberni’s count was yesterday, December 29th. I’ll update this post with the total number of birds seen across the whole Port Alberni count area (by other groups, too) when END_OF_DOCUMENT_TOKEN_TO_BE_REPLACED